VS provided preliminary design, all surveying, right-of-way plan development and a multitude of other services for roadway reconstruction/resurface (major pavement replacement) of SR 256 in Scott & Jefferson Counties, Indiana. The project includes roadway improvements (reconstruction and resurfacing) along 18.5 miles of SR 256, as well as all safety modifications at intersecting roadways.


Right-of-way Engineering was initially set at 555 parcels from US 31 in the Town of Austin to State Road 62 in Madison when conceived, which only rendered 60% design completion before it was put on hold. Subsequently, two re-scopings condensed the project to 5 miles through the Town of Austin, then to SR 203, netting a total 150 right-of-way parcels completed to 100%.


Commonly issues faced on this project were re-acquiring the existing right-of-way, dealing with easement rights as claimed by utilities, and historic properties. A close-knit relationship was developed between VS staff and the project managers in Seymour District to coordinate the day-to-day issues that presented themselves through land acquisition. 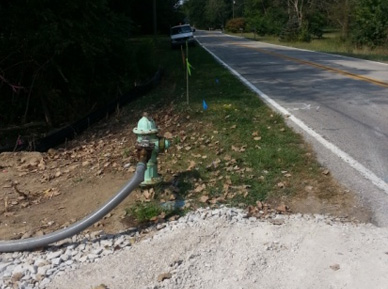