VS Engineering worked with the City of Carmel to provide a scoping report that included the evaluation of numerous design alternatives. Alternatives included an enclosed storm sewer system, a hybrid ditch network, a series of culvert replacements with ditch grading, upstream regional retention, and channel improvements for the major drainage way through the subdivision. The ultimate selection proposed by VS and selected by the City was for an extensive hybrid ditch project within the neighborhood of Jordan Woods and an upstream regional detention pond.


The regional pond included the creation of a new water feature on an upstream golf course that provide up to 3.2 Ac-Ft. of storage and have significantly reduced flooding in the downstream neighborhood. Construction components adjoining the regional pond, included sand bunkers, a new fairway, a new green, irrigation, landscaping plantings, a storm sewer collection system, and new cart path. Construction costs for proposed improvements for both projects were approximately $2 million.


The project consists of the construction of a system of hybrid ditches throughout the residential neighborhood of Jordan Woods to enhance drainage capacity and reduce flooding. Infrastructure improvements include approximately 10,700 linear feet of HDPE pipe, nearly all of which will be perforated and installed within an infiltration ditch section allowing for micro-detention along the edge of roadways and enhanced infiltration into the subgrade and installed network of underdrains. Approximately 135 structures, primarily Nyloplast type configurations, will be installed throughout the network. Ditch grading, utility relocations, and paving including asphalt roadways and drives, concrete drives, and gravel drives are included within the desired scope of work. 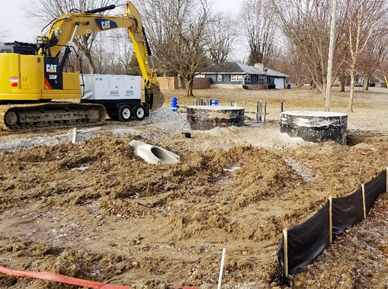